Solidarity: the solution to both the pandemic and the struggles of refugees

Solidarity: the solution to both the pandemic and the struggles of refugees

“In Afghanistan, my mother taught me how to sew. Now the coronavirus has crossed borders, and I wanted to invest my time for others and give them masks to protect them as France has protected me.” Hamidullah Hussaini (in grey), 23, a refugee from Afghanistan, has stitched over 700 protective masks during the COVID-19 pandemic to help support his new community.

Just a couple of months after the first Global Refugee Forum (GRF) in December 2019, the COVID-19 pandemic took hold and dominated nearly every aspect of life, causing unprecedented difficulties across the world.

Among other things, the increased burdens on health systems, shortages of protective equipment, disruptions to supply chains, and the move to remote working and education have caused problems for many worldwide. For those forced to flee and their host communities, this has exacerbated existing difficulties.

The ongoing stocktaking exercises on the Global Compact on Refugees (GCR) have helped to give a clearer idea of the current situation through the assessment of progress and identification of gaps. Much more support – financial, material, and third-country solutions – is still desperately needed. The infographics on the preliminary outcomes of the stocktaking exercises give a clear picture of the current situation, and the areas of greatest need.

A concerted focus on pledge matching and the High-Level Officials Meeting (HLOM) this coming December bring further opportunities to fulfil existing pledges and define areas where new ones are needed.

Progress can already be seen across a range of areas. Despite the devastation it has wrought, the pandemic has shown the lengths to which most people are willing to go - the sacrifices they are willing make - to protect those most vulnerable.

Pledging entities, facing increasing demands on resources to deal with the pandemic, have shown incredible commitment to the principle of leaving no one behind.

Development actors, cities, and agencies have played leading roles in ensuring that refugees are included in the health response to the pandemic. Private companies have adapted and expanded pledges to meet the heightened needs. And several States have made progress in tackling statelessness, adopting national action plans, and acceding to UN conventions on statelessness.

In order to track the impacts of the commitments made at the Global Refugee Forum, pledging entities are encouraged to continue to share progress made on their pledges. 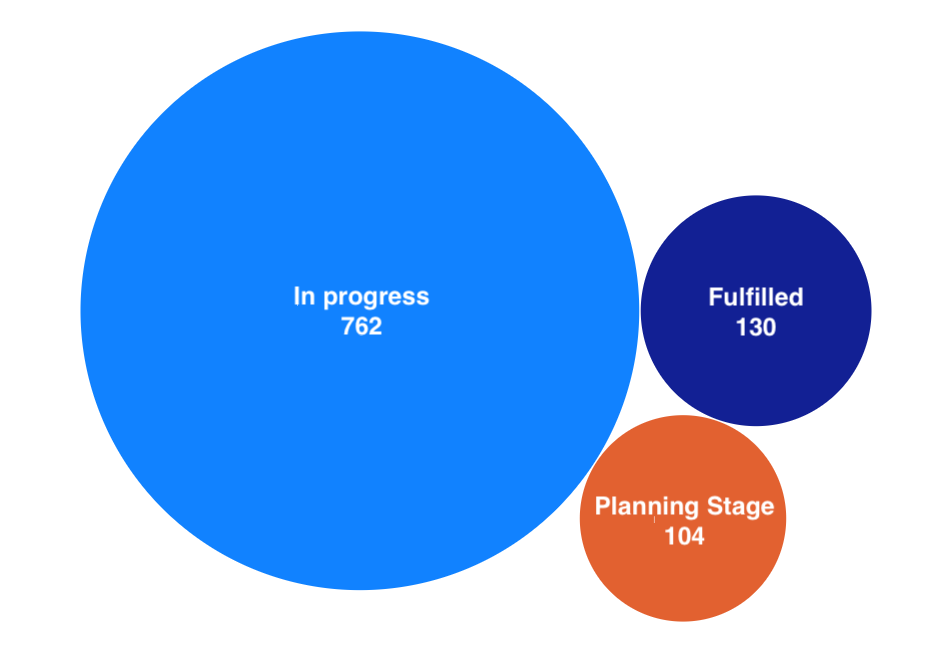 Here, we explore some of the difficulties the pandemic has created, their similarities to existing problems faced by those forced to flee and their host communities, and how fulfilled pledges are helping to overcome these challenges.

As has happened during the pandemic, misinformation on social media and in the press creates huge problems for refugees and IDPs, driving discrimination, and causing distrust between refugee populations and host communities.

Somos Panas - in partnership with Save the Children, Caracol Televisión, and UNHCR - launched a campaign based on four common myths surrounding Venezuelan refugees and migrants in Colombia. The campaign consisted of videos tackling xenophobia and promoting solidarity between Colombian and Venezuelan children, showing that girls and boys can be active members of society, and powerful drivers for change. Thanks to the partnership with Caracol Televisión, the videos were shown at prime times, reaching tens of millions of young viewers.

From higher unemployment levels and increased childcare burdens, to increased rates of domestic violence and school dropouts, the pandemic has disproportionately affected women and girls.

In 2019, CARE pledged to perform a Rapid Gender Analysis in all of its refugee operations and share the findings with other organisations to help inform their approaches. CARE successfully conducted the analyses in every one of the countries in which it operates which have large scale refugee responses. The results suggest that, as with the world population more generally, the pandemic has deepened gender and social inequalities, and the evidence strengthens the case that more must be done to tackle this discrimination.

The Government of Canada pledged USD 400 million over three years, and along with international partners, announced 44 new projects aiming to improve women and girls’ access to quality education and to break down barriers, with a special emphasis on crisis and conflict-affected situations. Amongst these are projects which focus on the education of refugee girls, including Palestinian refugees in the West Bank and Gaza and South Sudanese refugees in Burundi and Tanzania. Part of their financial pledge is also going towards partnerships with organisations such as Equal Measures to better understand how crisis and conflict situations impact girls’ education.

Like gender discrimination, social inequalities have also deepened as a result of the pandemic, resulting in high levels of unemployment and shortages of basic provisions. For refugees and displaced people, access to employment and the labour market is key to becoming self-reliant and integrating into their host communities.

The Government of Peru implemented a policy which has led to the recognition of 7,562 degrees held by refugees in the areas of health sciences (4,871 degrees recognised), education (1,099), and engineering (1,592). Not only does this mean that thousands of refugees will now have access to careers for which they are trained, but also that Peru now has thousands more qualified doctors, nurses, teachers, and engineers, proving once again that refugees can make valuable contributions to their host communities.

Non-profit Kiva Refugee Investment Fund delivered on its pledge to provide microcredit loans to refugees and people in fragile communities. The final close of the fund was announced as being USD 32.5 million, which had been lent to thousands of people, enabling them to establish businesses to become more self-reliant. Kiva hopes that the fund will provide a roadmap for other investors, increasing opportunities for sustainable lending.

Similar to other groups with specific needs, people with mental and physical disabilities are much more vulnerable to the effects of COVID-19 and need to be shielded in order to mitigate the risks.

The Ministry of Foreign and European Affairs of the Republic of Croatia has fulfilled their pledge to provide inclusive, accessible playgrounds for Syrian child refugees in camps in Jordan. The playgrounds are equipped for children both with and without disabilities, ensuring all children can play together in one inclusive space. It is hoped that the project will be used as a prototype to ensure children around the world can participate equally in learning and play.

The Women’s Refugee Commission (WRC) delivered on their 2019 pledge to support the effective implementation of the Inter-Agency Standing Committee (IASC) Guidelines on the Inclusion of Persons with Disabilities in Humanitarian Action. To prevent and better respond to gender-based violence against women and girls with disabilities in displacement settings, WRC conducted 12 training webinars, reaching over 350 practitioners and persons with disabilities in Sub-Saharan Africa, South-, and Southeast Asia.

A very timely pledge was fulfilled by the Avanti Connectivity Project. As the world turned even more to digital means of communication, Avanti provided laptops, free bandwidth, and solar connectivity equipment, coupled with maintenance and customer support services, enabling refugees and host communities in Northern Uganda to keep in touch with their families and friends, while receiving up-to-date information on the pandemic and the situation in their home countries.

Looking to the future

As with the pandemic, there is no single quick fix to the crises people forced to flee and host communities face.

To galvanise pledge fulfilment, UNHCR is offering support in the process of pledge matching. By pairing the pledges from host communities with resources from donor entities, we can ensure that promising programmes and policies get off the ground, turning commitment into action. Find out more about pledge matching, including the pledges from host communities needing to be matched across different regions.

As outlined in the GCR, the answers lie in our ability to work together to create more stable and sustainable living conditions for everyone across the world. The pledges fulfilled so far are shining examples of international solidarity in action – people, organisations, and States working together, acknowledging our collective responsibility and striving to do better.

Preliminary Outcomes of the Stocktaking on the Global Compact on Refugees

A series of stocktaking consultations and processes were held throughout the year at the regional, stakeholder, and thematic levels to assess progress against the more than 1,400 pledges made as part of the 2019 Global Refugee Forum. With only a few months left before the High-Level Officials...

Two years after pledging to donate satellite broadband connectivity and hardware to seven sites in refugee settlements in Northern Uganda, Avanti reports on its progress.

The legal community comes together for refugees and surpasses expectations