Nicaraguan and Costa Rican schoolgirls play during their lunch break in Upala, a small city near Costa Rica’s northern border with Nicaragua.

Population figures as of June 2020

For more information, visit the UNHCR Refugee Data Finder, information and fact sheets on the refugee situation in Costa Rica on the Global Focus and the Operational Portal.

Costa Rica has increasingly become a major destination and transit country for asylum seekers from the Americas’ four main situations (namely from Nicaragua, Venezuela, NCA and Colombia), as well as mixed movements. The country has the highest number of asylum seekers, refugees and other persons in need of international protection for 30 years. The number of asylum applications exceed the 90,000 people and is expected to continue increasing if causes of displacement persist.

By adopting the CRRF/MINARE as a direct implementation tool for the operationalisation of the GCR at the regional level, the country has reorganized its response to refugee situations adopting a whole-of-society, whole-of-state strategy. To support the implementation of the MINARE, a two-level structure was established: a technical level managed through a National Technical Team (NTT) and conformed by technical staff from five institutions that support the response to asylum seekers and refugees. These include the General Directorate on Migration and Foreign Affairs, the Social Welfare Institute (IMAS), the Vice Minister of Government and Police, the Ministry of Labour and Social Security, the Ministry of Foreign Affairs and Cult, and the Ministry of National Planning and Economic Policy. The NTT supports the implementation and institutional coordination to advance on agreements. At the political level, an Executive Committee was created conformed by high-rank officials of the previously mentioned institutions. This level provides political support to the agreements. The Vice Minister of Government handles, by presidential mandate, the coordination of both structures.

MINARE was created as a forum to coordinate responses for people with international protection needs. Hence, MINARE facilitates the coordination and joint work among other institutions and public entities to provide a comprehensive response for people forced to flee.

MINARE entails as well broader partnerships outside the public sector, including civil society organizations, the private sector and the academia.

Costa Rica stands on a long tradition of providing asylum and protection to refugees and asylum seekers. However, its national asylum system is under pressure as a result of displacement situations in the region, particularly Nicaragua. The country hosts approximately 100,891 persons in need of international protection, this figure represents 2% of Costa Rica total population. Out of that number 90,891 are asylum seekers (mostly Nicaraguans) and 9,801 refugees.

Through the implementation of its national chapter Costa Rica increased the overall recognition rate of refugees from 21% (2019) to 49% in 2020. Similarly, the Refugee Unit opened an office in the northern border to ensure access to the national asylum system. The access to state-run social services extended to include asylum seekers and refugees on an equal standing with nationals and provided medical insurance to 6,000 refugees and asylum seekers in high vulnerability.

Despite these efforts, the pandemic has aggravated the challenges to respond to this population, including extended claim processing times, loss of livelihoods, economic hardships, and xenophobia. In response to this scenario, the national technical team quantified and developed three concept notes on key sectors that include social assistance services, health services and the access to the national asylum system for refugees and asylum seekers.

Costa Rica is expanding its operational capacity to respond to forced displacement in the region through the adoption and implementation of the commitments in their National Action Plan. 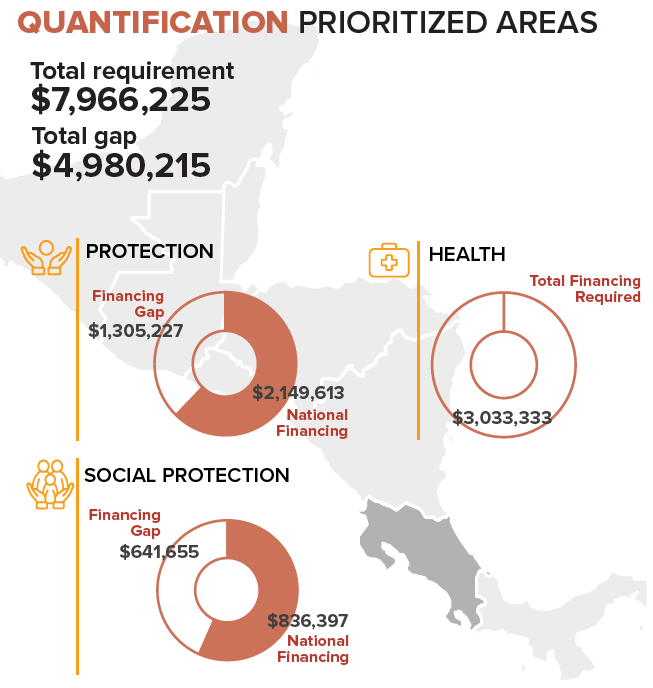 In line with MINARE, Costa Rica’s Migration Authority decentralized the Refugee Unit by opening a new office in the community of Upala, at the northern border. The Regional Refugee Unit enables the early access to the refugee status determination procedure. The office is equipped to receive refugee claims, hold eligibility interviews and provide identification documents to asylum seekers, as well as to identify special needs and necessary referral to services early on. The decentralization reduces waiting times for eligibility assessment interviews and alleviates the workload of central offices in San Jose.

The Social Welfare Institute (IMAS) has the mandate to implement poverty reduction programmes at a national level. Based in MINARE’s agreements, IMAS provides social assistance to asylum seekers using the same selection criteria as nationals. This is possible by including persons of concern as a category in the Personal Information Sheet (FIS, for its acronym in Spanish) for collection of socio-economic and demographic data. Thus, the persons of concern living in extreme poverty can qualify for the state’s welfare programmes including cash assistance, scholarships and other subsidies or in-kind assistance. This change allows IMAS to comply with the special protection mechanism that applies to this population according the Interamerican Human Rights System.

The Ministry of Labour and Social Security allows refugees and asylum seekers to submit labour inclusion requests through the public employment service platform. In addition, the Ministry along with the private sector signed a series of MOUs to strengthen joint initiatives to promote the inclusion of persons of concern in national job placement schemes such as “Integrate al Empleo” and “My First Employment”. Such programmes aim to increase asylum seekers’ probabilities to enter the labour market by providing training on soft and technical skills.

Pledges and contributions made by Costa Rica

This dashboard includes all pledges and contributions made towards the implementation of the Global Compact on Refugees in Costa Rica, including national pledges made by the Government of Costa Rica itself.